How Will The NDP, BC Speculation Taxes and Foreign Buyers Tax Affect Vancouver Real Estate? 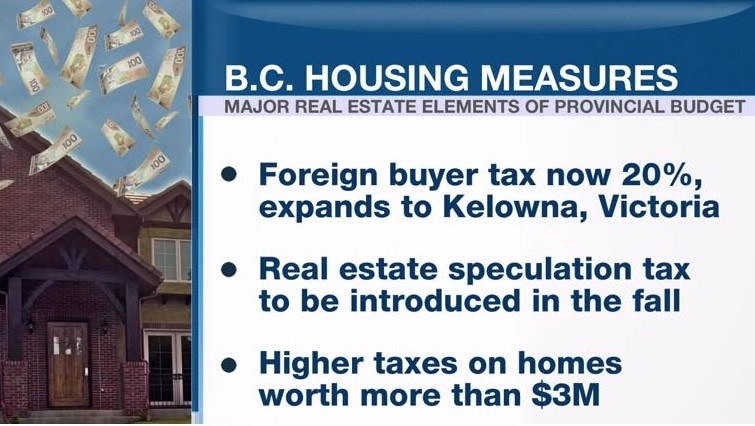 Residents of British Columbia, and particularly those within the Vancouver area, are well aware of the recent trends in the vancouver real estate market, especially in 2018. The continuing rise in prices for Vancouver housing units within the region, most notably for vancouver condos, has lately become an increasingly unavoidable fact… and, with that, it has also turned into something of a political hot-button issue for the New Democratic Party (the NDP), and their ensuing budget plans.

The proposed budget will implement a series of strategic measures, aimed at cooling the vancouver condo market and, ultimately, achieving a drop in prices. Chief among these are two measures aimed specifically at reducing the amount and magnitude of speculation surrounding local vancouver real estate, namely the imposition of a new tax (referred to, simply, as the “speculation tax”) and the increase of bc foreign buyers tax, up to 20 per cent.

These measures seek to deter the increasing flow of capital that, according to various critics, has been saturating the housing market, thus causing a constant and palpable rise in prices. Their reach is also expected to extend beyond the Vancouver real estate metropolitan area,such as Vancouver, North Vancouver, West Vancouver, Burnaby, Richmond, Coquitlam, Port Coquitlam, Surrey, Abbotsford, and other regions of British Columbia like Kelowna and Nanaimo. The foreign buyer tax, which previously stood at 15%, is now expected to generate in excess of 40 million dollars additional revenue, on an annual basis.

Speculation tax in Vancouver real estate and BC Properties

In terms of the “speculation tax”, the government has specified that it would be applied annually on those home-owners who do not presently pay their income taxes in British Columbia. There will be an exemption, though, for long-term renters as well as those who use their local home as a primary residence. The rate will be set at 0.5 per cent the first year (2018), then increase to 2 per cent the following year and in perpetuity. The tax will be charged upon a property´s value, as assessed.As Finance Minister Carol James made clear during the presentation of the new budget, the government is seeking to use these measures in order to lower real estate prices in the local market; however, she noted, they do not as of yet possess any actual concrete projections as to how these measures are likely going to affect the price of properties in the following months and years. She stressed that the government will keep a keen eye on this, and indeed will continue to monitor the situation as it unfolds.These new housing measures are one of the principal pillars of the new budget, the first to be proposed by the NDP since they first formed government last summer. While the executive hails these measures as necessary and beneficial, some experts (including those at the Business Council Of B.C.) have noted that they are unprecedented in their scale, and the effects they ultimately have upon housing prices may prove negative, and overall disruptive for the market as a whole. In fact it may actually raise prices!The announced measures are part of a 30-point action plan, proposed by the government in conjunction with the new budget proposal, aimed at cooling the housing market progressively. and make real estate more affordable for residents. Among the other points, there is a plan to boost housing tax on so-called “expensive homes”, which specifically refers to those properties currently valued at 3 million dollars or higher.Also among these points are plans to build thousands of new social housing units, as well as new student housing to be developed during the years to come. This measure, among others within the plan, alludes to a commonly held belief regarding housing prices, namely the so-called “supply myth”, which states that high prices in the current market are due to a lack of supply in proportion to the high demand, and therefore, that the solution for making prices more affordable lies in creating a larger supply pool, which would then cool the market eventually.However, this “myth”, as some critics designate it, is far from universally accepted. Indeed, from the world of academia there is severe criticism towards the premise. Dr. John Rose (who penned a report on this very issue, precisely titled The Housing Supply Myth) has concluded, after analyzing data going all the way back to 2001, that there is, in fact, no shortage of supply in the metropolitan area, and that, actually, the government has been adding on average 1.19 units of housing for every single new household that has come since. Simply put, there does not seem to be any objective data to support the claim that a higher volume of supply would lead to a decrease in prices, despite the apparently intuitive nature of the claim.Moreover, the proposed measures have attracted plenty of criticism also, due to the fact that many believe they will, ultimately, lead to an increase in prices, rather than the opposite. This is owing to several reasons. One of the main issues, as pointed out by critics, is that such an increased foreign tax rate, as well as the new “speculation tax”, will almost certainly deter potential developers from building their projected developments within the urban areas, as they will feel less inclined to do so based on the increased fiscal pressure that will now be applied on them. On the other hand, there is also the clear and present danger of eventually passing down the additional costs of development on to the final consumer, as developers and investors will likely seek out more cost-effective ways of managing their invested capital among local housing developments, which, in turn, will unavoidably cause the final prices to increase exponentially.As noted, the increased tax rates and higher fiscal pressure on developments is viewed with much caution by many, and some observers have noted that a plausible alternative for such a model would be to implement what is commonly known as “supply-side methods”; that is, favouring a lower taxation overall, while making decreased regulation an administrative priority. It is widely believed that by lowering taxes on companies, they in turn will be able to hire more personnel and this will ultimately have a positive impact in regards to overall growth, and particularly towards increasing demand. This, some argue, will have the power to alleviate pricing pressure on the currently red-hot housing market.

Vancouver condos may increase further in price, even in products like surrey condos

It should also be noted that, while housing prices across the British Columbia have been on the rise for quite some time and are likely to continue to increase, at least for the time being, there is little doubt that the price of many condos, including vancouver condos , north vancouver condos, west vancouver condos and east vancouver condos in the area is likely going to suffer this price hike much more significantly than other properties, mostly due to the strict mortgage regulations that have been placed upon them. In an area of Surrey called Whalley, surrey condos are rising rapidly in price as well due to increased migration into the whalley area.

As there are small restrictions on supply side for Kelowna and Nanaimo residents and permits do no typically take as long to be approved, the markets may actually cool in these areas. Both regions of Nanaimo and Kelowna are seen as alternatives to the hot Vancouver real estate market, but they may dim as investors catch hold of rising prices in Vancouver homes despite the efforts by the NDP government.